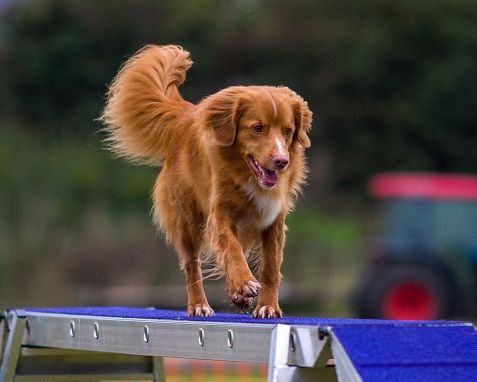 Solo is our 5th Toller, a home bred boy and has been a huge learning curve for us to deal with as he was unfortunately born deaf which is not something you would ever expect in this breed so we can only attribute it to an infection that his mother had in the womb which also explains the other issues we had with his litter, i.e losing the rest of the expected puppies.

As a dog he is stunning, as a character he is very willing to please and tries his very hardest to do so although at times his deafness can cause him to question you, probably because we haven't been clear enough in telling him what we want. He has done some basic obedience work, he is now competing at Rally and Agility. Sadly because of his deafness he cannot be shown, we like to think he would have done very well in the show ring if we had shown him.

All his historic results can be found here

Highlights so far are his winning into Grade 5 in 2019. He also had a very successful 2017/18 season and won most of the trophies within the Toller Agility league that he was eligible for.

He has also won into UKA Senior Performance and Steeplechase and is well on his way to Championship level. He has also gained his Silver Agility Warrant.

his results can be found here